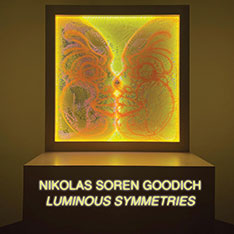 Delve into the unique painting of Nikolas Soren Goodich who harnesses light and fetishizes symmetrical, Rorschach-mannered portraiture. Based in Los Angeles and exhibiting internationally, Goodich is pushing the boundaries of how pictorial space is displayed and experienced while consummating a longterm inquiry into the mechanics and poetry of marrying compositional symmetry and subjective portraiture.

These spectacular new works by Nikolas Soren Goodich are realized from the interiority of his own erudite and alchemically based notions of reality. They are expressive of his carnivalesque intuitions and logic systems. The artist has invested decades of his life’s work in these remarkable spectral layered plexiglass print-paintings.

These are works rife with formal invention from process to technique to title.

These are Thinking Machines

They are about seeing into and projecting onto mirrors of our shared and private universes. There is a sense of stillness, serenity, and quiet which, in duality alongside that, is a paradoxically visceral roiling engagement with matter itself.

The artist posits that: a belief in nothingness is neither anarchy nor everything. The works are objects that propose an elegant equation about human reality itself.

Furthermore, on each side of this dialectical is a living person.

Unbroken is the state that we all must achieve. The artist states further that this is not merely a Heideggerian be-ing potential that we must seek. It is not (simply) the positing of this potential – it is instead an existential act, a pointing directly at the (living) fact, at a universe that is itself dialectical, fully conscious.

Summoning answers that are at the still point of the very center of being.

One diptych, Kiss Me Before the Universe Ceases to Exist, is composed of mysteriously layered mono-printed edgework, both off-white and vibrant bursts of fractal color spaces, all of which seem to depict a nervous system…substrates of mycelium… galactic system of interconnecting solar systems…budding electrical arrays.

As above, so below.

The artist finds neo-psychedelic pareidolia: what a face is—as any referent can be—when found hidden in absolute abstraction. These faces are all seen in profile.

These are not safe. The ask hard questions about what is real or unreal, representational figuration or abstract linguistic symbolic forms. What and how is a person thinking, feeling? These are double inverted portraits, printed twice. Reprinted. Upside down and looking away. Portraits that look in at themselves and, obliquely, out at the viewer, too.

They ask you to look. To see.

These are works that gift a viewer the chance to imagine a third place, a space that is not defined, thus allowing for more and more to “be,” to become; to find in neological indeterminate visual and cognitive places. They’re open, versus closed; this one in space, and this one on the wall.

Shifts in scale, but of the same exact proportions. Options. Levels of meaning.

On the Influence of Max Ernst and Lucas Samaras

These works are the proportion of Polaroids and thus contain a reference to Lucas Samaras, who performed his own cosmic alchemical transformations upon the surfaces of Polaroids. Samaras formed a foundation for what Nikolas Soren Goodich would do in the future. Samaras’ work is at this artist’s core; in his genes, epigenetic aesthetic of color, light, heat, frisson, abstract mark, scratches.

Also ever present is the cosmic nature of the works of Sigmar Polke and Anselm Kiefer. Surfaces. Textures. The industrial organic. Nature magic.

Other early influences include Otto Dix, the boldness of Max Beckmann, the raw brutal face of history in the cartoons of George Gross, the classical sense of the social in the portraits in Daumier.

A shared love for this obscure comprehensive text is held with his African American historian mother. In the artworks one finds a gestalt that attempts to point at a possible antidote to the horrors of Late Period Global Capitalism; think of the ethos of Angela Davis, Eldridge Cleaver, Howard Zinn, Noam Chomsky, Amy Goodman. The artist grew up in a radical social milieu that rationalized our shared struggle against the darkness of the human world.

The autodidact artist’s voice shifts to talk about where he comes from: politics, his mother, a renowned historian, with her intimate involvement in progressive social movements. His grandfather’s activities in a future Kiev; the American Communist Party. His father, a graduate of Bronx Science who became a noted Director of Photography in Hollywood. The visual, the politically radical, the creative core. Intellectual. Integrity.

Summoning the Other is the Conceptual Effort: The Impetus to Create, to Form

On each side of the dialectical is a living person. They are seeing and/or projecting the universe. There’s an equation that is desirous of, demanding, an answer.

The artist states that in summoning answers—from meditative still points of consciousness—there is an aporia; places where the dialectical can try to find resolution. The dialectic implies its center. All those levels operating to synthesize metaphors; levels of content being recursively brought into and out from the works centers. The question of survival is right there in the work again and again. The purpose of making them is right there in the ineffable. The work has spiritual cathedral like-light. Revelation.

There is the repeated symbol, a drawn formulation of frequencies; be it of light, wind, sound, vortices, gyres, gravity, the electromagnetic. The frequency symbol as the base movement of light where the colors, photons, are working through their spectrums. These are references to quantum super-symmetrical structures—a metaphor for life itself—there within how the colors and forms commune.

Wishing for abstraction to have its own sentience, its own life.

Allow the viewer to imagine and view a third place: face, space, interface, actual and virtual that is not defined, discovered, found.

Goodich’s Studio is a Hive of Artistic Activity and Ideas

Levels of content being recursively brought into the work. See in the work the alchemical as metaphorical and the reasons the artist reads obsessively about chemistry, biology, neurology, physics, metaphysics, linguistics, phenomenology, science.

Both influenced by and counter to the revolutionary works of Sigmar Polke, which deployed an arsenal of alchemical methods and found images, Goodich’s equally experimental and hyperdynamic works are driven instead by his own hypercreative notions, a visionary homunculus that is neither appropriated nor evasive, neither a copy nor occult, unique and directed in its provocativeness.

A Directorial Series of Intensive Actions in his Processes

Formal permutations given structure to find expressions of his own spectral philosophical reality in an explosion of painterly printed mark and textural work captured in bold lucid luminous forms on plexiglass and on canvas. Light literally inside the paintings.

These are not only remarkable explorations as paintings, they’re also extraordinary filmic frames presented as multivalent artworks. Works that actually shift and change from one moment to the next; light, reflection, layers, matte, gloss, abstractions form and then devolve and then reform.

German film director Werner Herzog once said “We live in a society that has no adequate images anymore...” To produce and provide just such viscerally potent neological images is exactly Nikolas Soren Goodich’s singular artistic intent and the outcome of his unique and inventive practice.

When asked, Sigmar Polke once told one of his collectors that the title of the work they had purchased decades earlier is “Whatever you think.” By comparison Goodich’s titles give us further levels of definition to the layers of meanings inhabiting his spectral luminous light presences, that are then perceived by multiple senses all at once. Like Polke, Goodich’s work must be photographed to show the alchemical in the paintings in progress.

These works recall the Lens Paintings of Polke, in that the position in which the viewer engages the works causes diverse and variegated luminous variances in their appearance.

“It is difficult to think without obsession, and it is impossible to create something without a foundation that is rigorous, incontrovertible, and, in fact, to some degree repetitive.” This provocative remark well describes both the artist Nikolas Soren Goodich and his robustly stimulating, refreshing, incontrovertibly evolving works.

This text is realized from Vincent Johnson’s interviews with the artist Nikolas Soren Goodich on October 10th and 17th, 2021. This is a record of the artist’s practice, ideas, motivations, histories, notions and artistic concepts. The artist’s own words and ideas speak in this essay.

Vincent Johnson is an artist and writer in Los Angeles. He holds an MFA from Art Center College of Design, Pasadena, California. He has exhibited in New York, California, Miami, Germany, Portugal and Canada. Johnson’s work has been reviewed in the New York Times and Artforum. In the Fall of 2021 he conducted a seminar on the Black History in Art History at Hunter College, New York. In 2022 he will participate in a symposium on the next phase of this research project at the University of California, Santa Barbara.

Join the Nikolas Goodich newsletter and stay up to date on press, new artwork, and more!